A week ago yesterday, I was cut upen. Although this story is far from unique I figured I’d share how I got there and my experience with the entire process; if only for future reference.

It all started in March this year, when I participated in this year’s Mud Masters. About 200 meters before the finish line my hands slipped off the monkeybars dropping me in the water below. Not being able to see where I landed caused me to sprain my knee, which didn’t pose too much of a problem with the finish within a stone’s throw. So I limped the rest of the distance and that was that. This story probably would have ended right there if it hadn’t been for my football (by football I always mean soccer) match the next day. Not having had a knee injury before I figured that, although I was in pain, I could probably play. The first half went by without incident. About 10 minutes into the second half I stepped out to reach for the ball when suddenly I felt my knee twist, heard something snap and felt a sharp pain. I lay there screaming for about half a minute before the pain went away, but it was pretty obvious I couldn’t continue to play.

After the incident the knee swelled pretty fast, making it hard for me to move. It was tested right on the spot by two of my teammates who happen to be a physiotherapist and a doctor respectively, but the results were inconclusive. I made an appointment with a general practitioner, which I saw two days later. He performed several tests (pretty much the same ones that my teammates had already done), concluded that my crucial ligaments were probably alright and urged me to wait it out. One of my teammates came by later that week to check again, which were inconclusive again. I was told by various people that an MRI at this point wouldn’t be useful, because the fluid in the swollen knee would make it hard to see the damage. And so, I waited.

As it turns out it’s pretty hard to see how swollen something still is if you’re looking at it all day, so after a week or so when I felt no improvement I called the general practitioner again, this time only to ask for advice. You usually get an appointment for the next day, however the next day was Easter so I had to wait about four days before I got another call, in which I was once again urged to wait until the swelling went down. Meanwhile, the swelling was down, but this was quite hard for me to notice. My sister meanwhile had grown tired of my indecisiveness and decided to have another physiotherapist she knew call me for an appointment (which I appreciated, although she could have told me ;]).

At this point I wasn’t experiencing any serious pain or instability, but I had difficulty bending and stretching my leg which made cycling impossible and walking awkward. Some tests were performed again, and once again they yielded uncertain results. The fact that my knee seemed to "lock" (even after weakening my hamstrings with dry needles) though pointed towards a meniscus problem, which when damaged sometimes slips into the joint, inhibiting its movement. However, also because there was so little movement in my leg, it was impossible to rule out a problem with the crucial ligament. A meniscus injury sucks, but has a recovery time of "only" about 3 monts, as opposed to the 9 months to a year recovery associated with a torn crucial ligament, so the thought of it being that had me relieved.

The physiotherapist arranged an appointment with an orthopediatrician, who sent me for an MRI (finally, I might add) the results of which arrived a week later. Fully expecting a meniscus injury, I got two types of bad news. First of all: the MRI showed no obvious reason for my leg’s immobility. My meniscus was fine. Secondly - and most importantly - my anterior crucial ligament was completely ruptured, gone, no more. Since I am pretty serious about sports (before the injury I practiced several types of sports about 5 / 6 times a week) it would be hard for me to live without this ligament - so I needed surgery. This time still not being able to walk properly turned out to be an advantage, as I got priority and was scheduled for surgery two weeks later.

At May 3rd I went to the hospital at 10am, where I was assigned a bed and the nurses explained me what was going to happen. After about two hours I was taken up for my anaesthesia. I had opted for a spinal, as had been advised by my surgery-veteran sister and my mum. The anaesthesia went smoothly and about 15 minutes after having received an injection in my back, my legs were completely numb and paralyzed, except for a weird tingly-feeling which never quite left. I was then taken to the operation chamber where about 10 people were preparing to fix up my knee. Anaesthesia is weird. Your brain uses the last known sensory input it got from your limbs to estimate their position, and after a while of not having any data it is going to be very wrong about it. The orthopedic surgeon used this to joke around before the surgery:

Where do you think your legs are?
Ehh just lying down there I guess.
(With my legs on his shoulder) "Nope!

The surgery itself took about 1,5 hours. Although I was awake the entire time I wasn’t too aware of what was going on, the area between my head and lower body was covered so I couldn’t see anything. Because the entire hospital experience was new for me I opted not to follow what they were doing on a screen, as I wasn’t sure how I would feel about it. If I had surgery again I probably would watch. During the surgery I never felt my legs apart from the odd touch (there is some sensory reception left, albeit no pain reception whatsoever). I could however feel whenever they started drilling or hammering (they did both), because the vibrations resonate through your bones. This is a weird feeling but not as unpleasant as I feared it would be when someone told me this beforehand. Reconstructive surgery for an anterior crucial ligament (ACL) by the way consists of taking a tendon from your hamstring and attaching it in the place the ACL used to be.

When I was all sown up and bandaged the surgeon told me the operation had gone well, and I was taken back to the preparation room where I would be kept a while to check my vitals. Unfortunately here it turned out that I had to much urine in my blatter, still being paralyzed from the spinal they had to take this out with a catheter. Fortunately the bottom half of my body was still completely numb, because the thought of having had a tube stuck down my urinal tract is in my head still more uncomfortable than my knee being cut open.

After about half an hour I was taken back down to the initial ward, where I was forced to lay helpless while my anasthetic wore off. This took longer than I expected, I think it took some 3 to 4 hours before I had full control and feelling in my legs. This of course also meant I could feel pain. In the weeks before the surgery I had gone through some (very painful) mobilizing physical therapy sessions; after all there was no obvious reason for my knee’s limited mobility, so why not force it…​ While unpleasant these sessions gave me about 20 degrees of additional freedom in bending and mostly stretching my leg, which proved useful now as the bandages kept my leg pretty much fully stretched. This would probabaly have felt worse had I not had this extra mobility. I was still in quite some pain though, so fortunately my mother and sister came by at this point to distract me. Also I was given diclofenac (paracetamol++), and later when I still coulnd’t sleep through the pain a light morphine injection which granted me a few hours of sleep that night. 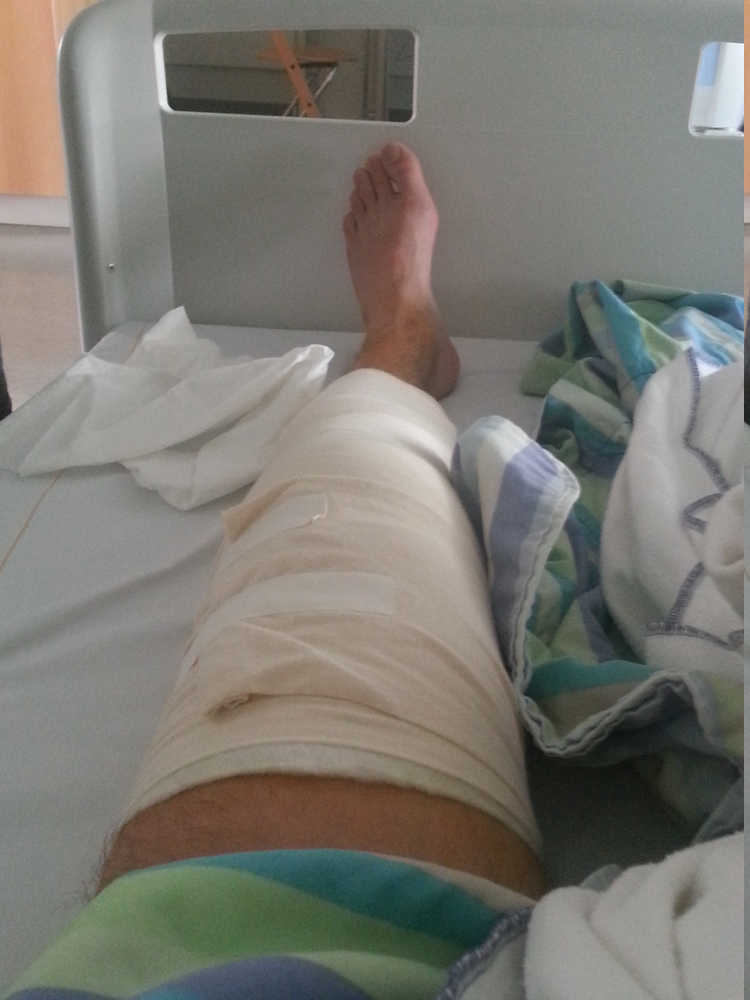 Figure 1. My leg after the surgery

The next day I received a short lesson in walking with crutches, which I already had extensive experience with from the weeks leading up to the surgery. My mother then took me home to my parents' place.

I’m now facing a 9 month recovery process, the first six weeks of which I’ll have to walk with crutches and be very careful. In a few weeks I’ll be able to do some controlled exercises to increase muscle strenght in my left leg. These exercises will gradually increase in difficulty until I regain full stability and strenght. There’s no shortcut - the new tissue simply has to attach itself to the bone, which takes time. Additional muscle strength around the knee stabilizes the joint though, which decreasing the risk of screwing up the new ligament. For now my daily activities consist of sitting down with my leg up, trying to entertain myself.

It is often said that you have to be assertive when dealing with the healthcare system, and I can only agree with this. The problem is that doctors - especially general practitioners - mostly see people with big stories yet minor problems. So when you’re like me and you only attend a physician when your limbs are all but dangling from their joints, you need some perseverence to convince them that there is actually something seriously wrong. This is not my strong side, in part because part of me wants them to be right about it being nothing serious. I was lucky enough to have other people take action for me, so in the end it didn’t take too long (about six weeks) before I had surgery. It probably could have been even faster had I stood up for myself some more.

I’m stubborn, I know that very well about myself, never asking for help if I don’t think it’s absolutely necessary. In addition, I always strive to be…​ well somehow better than I was. This has caused me to ignore problems like the pain in my knee before, but I’ve never been punished for it as severe as this time. I’ve had to cancel quite a few activities for the upcoming months that I was really looking forward to. I’m quite convinced that I’ll make an as good as complete recovery though, so I hope that this experience has taught me better judgement. For the time being I’m wearing the wristband they gave me at the hospital (with my name, age and barcode) as a reminder to, basically, "not do stupid shit" - so that next time I think "Yeah there’s no way that’s gonna hurt me" I might glance at my right wrist and think twice about it. 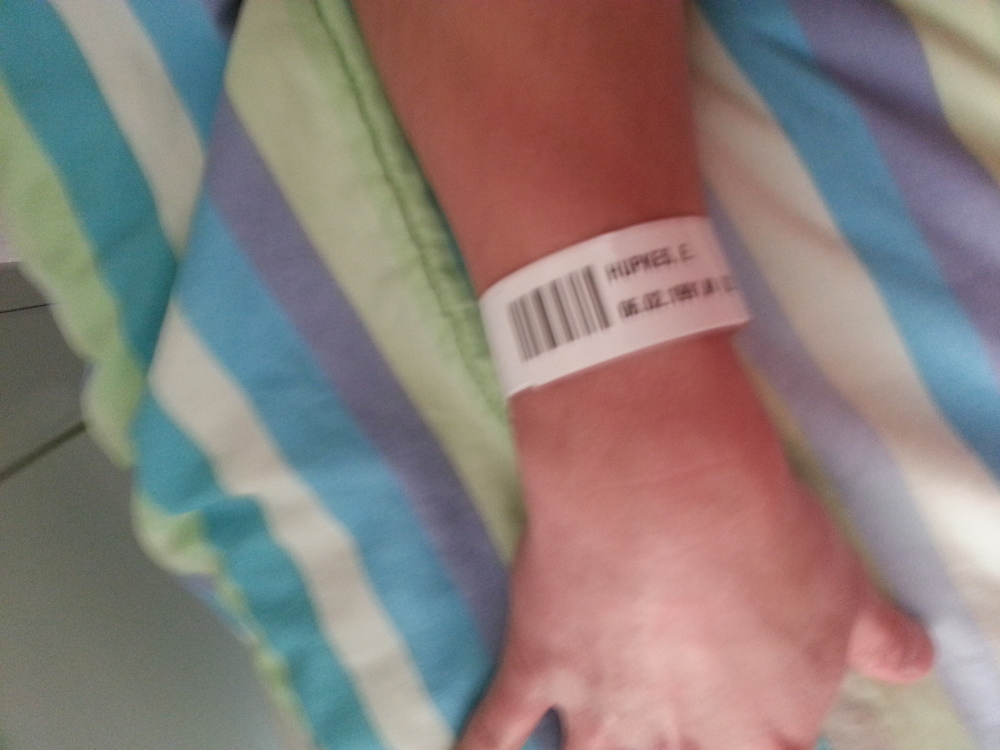